Today started off nicely with another free breakfast courtesy of the local Best Western. Then it was back to my room to Skype with Kim for a few minutes. She had booked a room at this resort which is about 35 kilometers north of Liberia. It sits between a couple of volcanoes, and is surrounded by sulfur hot springs and boiling mud baths. Throw in a couple of waterfalls and you probably have a pretty nice place. The problem was that I am picking up Kim at the airport at 9:30 pm and then we need to drive in the dark up the dirt road. Simple solution I would go up earlier today to scout out the scene.

And that is just what I did. It took about an hour and a half doing 20 mph most of the way. The Rinconita Lodge is a little funky, and a little charming. I even got our room a little early, and got to take a wonderful, but heart thumping walk. I thought I might be able to make it to the Rincon Natural Park, but after an hour and a half of climbing up up up, I gave up, came down the mountain, and took a nap. I like this place so much that I think we should stay here three or four days. We'll see what Kim thinks in the light of day.

Kim has helped to put the the financial situation in order. “Sure it was $600 ( she always likes to round down the cost to the closest hundred) to rent the car, but just figure how much we have already saved in Taxis and bus fees. It would have been $20 from the airport to the Liberia, then it would have been $40 to Rinconcito Lodge. From there if we wanted to do a hike in the park it would have be another $20 to the entrance and that is only for one of us. Double that and we have almost paid for the car!”

I liked the way she was thinking so I began to relax and get into the moment. We decided to go off to the National park. We got in our now very reasonably priced auto and headed off for our first adventure. Really the second if you include the trip in the dark up here.

The Rincon de la Vieja National Park had a big 4 kilometers loop which the friendly ranger assured us would take about 2 hours. Four and a half hours later we emerged with a nice set of memories and stories. We had seen a three pesotes, a snake, and some cool looking birds. Oh yea, and a waterfall and some mini volcanoes. Not bad, but so far no monkeys. There were a lot of people on the trail and I reasoned that they had scared away most of the wildlife. Here are a couple of photos from that hike.

Waterfall in the dry season

Kim taking a picture of a pesote

Pisote looking for food. Relative to the racoon

One response to “What a difference a day makes” 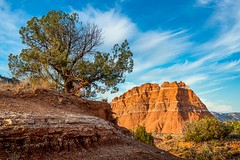