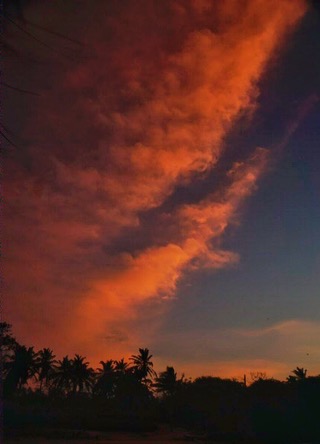 A nice sunset for our last night on Isla Grande

We arrived in Cartagena late yesterday afternoon. It was windy when we left Isla Grande. The boat that picked us up was very full with about 35 people. I though that it had about 15 too many people. We had a hard time finding a seat. I thought that the sea might be rough so I wasn’t surprised when the boat took off with a fair bit of shaking, but then our pilot slowed the boat to a crawl, and made the announcement that we were in for a very wet and rough ride, but not to become frightened, which of course had exactly the opposite reaction.

The boat had twin 250 hp outboard engines. Our pilot put the throttle to the max and soon we were at once airborne, and then came violently crashing down. There was a fair amount of screaming. One woman in front was even trying to jump off the boat. Other passengers were trying their best to hold her back.

Once again the pilot stopped in mid sea. The swells were enormous, so that the boat rolled and pitched in a manner that looked like half of the passengers were soon going to start throwing up. People again starting shouting, but this time “¡Hale, hale! Siga, por favor!” Which is just what he did. I have never been on a boat in such rough seas going so fast and had as much confidence in a captain. As the tall and muscular and shirtless blackman stood working the wheel quickly from side to side I could see that he was at one with the sea. He was in the zone. After awhile I started to get into it. I briefly though about getting out my camera, but then another full bucket of sea water was dumped on me I decided to leave it in the waterproof bag that I had put it in.

An hour later we pulled into the dock at Cartagena. Soaked but safe.

I was last to get off, so all I got was a picture of an empty boat with a lot of memories. 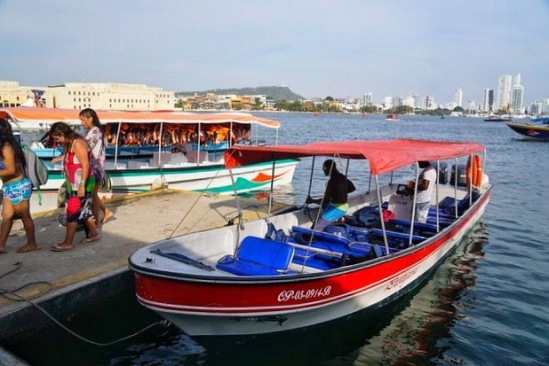 Safe and sound in Cartagena

Kim enjoying a well deserved alcoholic beverage after our adventure.